North Fork Quail Elk city OK. One of the most awesome gatherings this year.

Thank you for inviting me to be part of a great evening.

Join us as we work together to build quail habitat and populations in Texas and Oklahoma. We invite you to get involved, become an advocate and be a part of the solution. We can learn from each other and from champions in the field. You too, can become a part of the growing strength to deliver conservation and make sure we have quail for future generations!

Wild West  Party on the western set built inside the museum.

For the opening of the tournament, we had a western theme party. I performed some great trick roping stunts but for the Nuns and Doctors who sponsored the event. We also had line dancing for them and I tought the Nuns to line dance and trick rope. We even had a Dummy horse the guest sit on and roped a dummy calf.  But the guest lived to line dance and I was happy to teach them the electric slide.

Have a big thanks to  Dr. Ross, Dr. Shack, Dr. Hanna and the Bon Secours Nuns who took the stage with me to show off their trick roping skills.  We had a chuck wagon feed with the best BBQ in the state. The event raised over $300,000. I also want to thank all the players, Doctors and all the volunteers. It was my pleasure to be a part Bon Secours.

There were so many players that the golf carts numbered into hundreds. I looked up one line and seen them number up to 380.

Here is a few photos of the gathering. But yee haw! stay tuned for a lot more action this year.!!!! Chilling a real country style drive across the USA.

Times have changed over the last 150 years from bathing in a creek to what I bathed in a horse tank.

I really love bing in the parade in Enid and seeing so many of my trick roping students and family and friends. Enid is a wonderful to be here again this year.

Going to drive to Denver like  smokey and the bandit for my next show.

Eiteljorg Museum of American Indians and Western Art is located in downtown Indianapolis. The Eiteljorg is one of the worlds top four most prestigious museums, I taught trick roping yo who ever is wiling to give it a spin.

Saddle up for a journey to the American West right here in Indianapolis at WestFest. Visitors can expect to be immersed in the West, from the aroma and tastes of chuck wagon food to the sound of strumming guitars, from panning for gold to taking a ride on an authentic Wells Fargo stagecoach. This is a fun-filled event for all ages.
Included with museum general admission is a special appearance by The Oklahoma Kid 4th generation Wild West Trick Roper & Humorist will be at 11:30 am and be sure to come early and enjoy all the fun.
Eiteljorg Museum of American Indians and Western Art
Saturday, September 23, 2017
10 a.m.–5 p.m.
Museum admission
Visit Event Webpage

After my performance I was a hanging out with western movie producers Rick & Larry Sempson. Of Enid Oklahoma were I was suposably born. My father had a saddle shop across the street from there now western museums and movie set.

We had helicopters flying in guest and Executive Limo dropping off the VIP guest for the pre-party held indoors for some of the major donor from Louisville. Outside we had about 250 guest who also attended the live auction where we sold aged Kentucky Bourbon that sod for thousands of dollars per bottle. 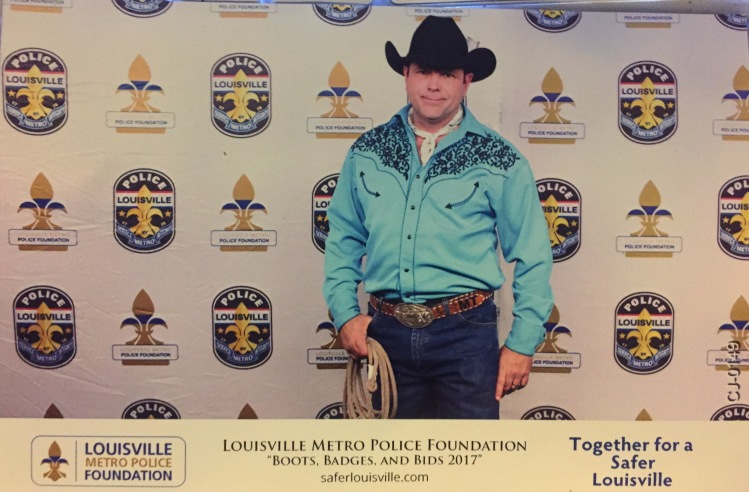 Boots Badges a Bid  is a fund raiser to assist Police and their families who been injured or killed in the line of duty. As the event started I visited with the VIPs inside Mansion until the rest of the guest arrived. After all the guest arrived I kicked off the evening with some fancy trick roping & comedy.

My ride to the event was with Officer Brooks and Vincent Pastora from the Sopranos and many many other gangster movies. When casting for the movie they had several old school gangsters actually go into movie. Vincent was accused of interaction with the man years ago and now hangs out with guys like me and John Conley music legend. Also in the photos above is my friend and evening VIP host the renowned authors Jessica Witmore. Saw wright those cool Vampire Love Stories so many watch  and read. The event was held in Jessicas mansion on her private gulf corse in Louisville. Photo above is of Jesica and Vincent.

John Conlee country music super star was one of guest for the evening and we were all glad to see him. John is one of country musics greatest legends with songs like- Friday Night Blues and Back side of Thirty.

VIP gathering for the auction.

Guest getting ready for me to kick of the show.

Jessica Whitmore goofing off befor guest arrive. She is an awesome host and we are thankful for letting us have the event at your luxurious home.

Thank you for inviting me to your Ball and I can’t wate till next year.

Enid Oklahoma is my birth city. My father owned a saddle shop there called Luft Leather Goods. I will be performing the parade in the morning and in the park after the parade.

Hope to see you there!!!

Larry Mahan was glad to meet my girls today at Teners Western Store during IFYR. He stays in touch and follows the girls trick roping on line.

This week in Shawnee Oklahoma they are having the International Youth Finals Rodeo with 20,000 people coming to perform here  in Shawnee. It is one of the largest gatherings in the world for rodeo. They run 3 rodeo arenas at one time side by side were you can get all the action you will ever need. I spoke with young cowboys who come as far away as Australia to perform in Roping and Bonk Riding. I was in Vegas at the NFR this year and it was impressive but over all, the Rodeo here in Shawnee is 3 times more exciting and has more booths and things to do than in Vegas. Heck we have casinos even here. If every you want to see some tough cowboys and see a super event then the IFYR Rodeo held here in Shawnee Oklahoma should be your first stop.

We visited with Larry Mahan about his Rodeo days with my father Raymond Tipton and Marty Woods world champion bronc rider I was named after.  They give me a hard time about that one. I remember when I was a little cowboy riding bucking ponies in 1st grade before mutton busten  my father riding bareback horses and Larry performing at the rodeos. I introduced my girls to Larry and he was impressed they trick roping. He even took a photo of himself and the girls with his own camera to keep. He’s a super nice guy and one of the worlds most famous rodeo cowboys ever. As a young rodeo cowboy I looked up to Larry.

We had over 10,000 guest in the park . People came from all over the world to this even just outside the giant Red Wood Trees. Tress so large you can actually drive your car through a hole in one were the road goes through. 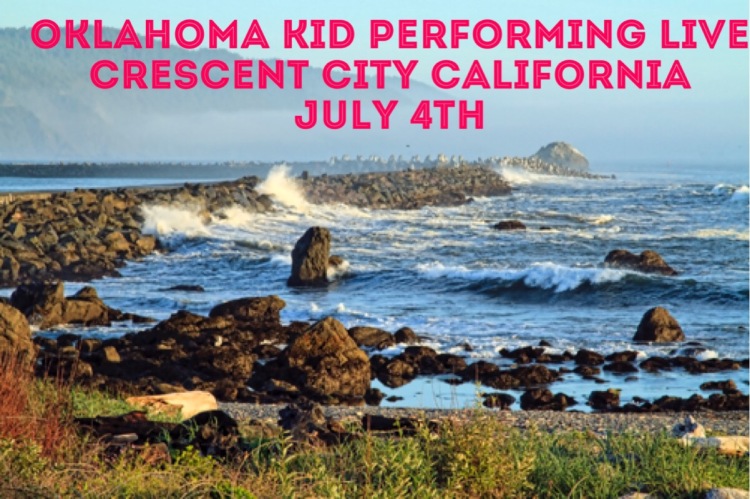